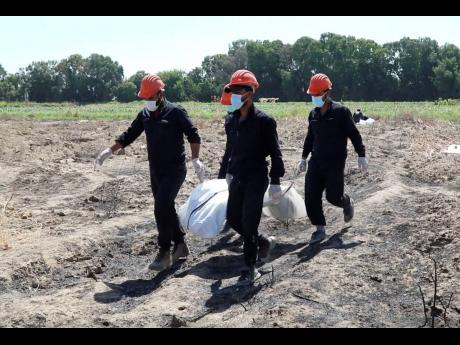 The Associated Press
This Sunday, July 14, 2019, frame grab from a video shows Syrian workers of the Civil Council of Raqqa digging for human remains at the site of a mass grave believed to contain the bodies of civilians and Islamic State militants in Raqqa.

In an open field on the outskirts of the Syrian city of Raqqa, workers in black uniforms, surgical masks and red hard hats toil under a scorching sun to dig up bodies from a large mass grave discovered last month.

They have so far unearthed 313 bodies from the grave since it was discovered last month, the official said. All of the dead are men, women and children believed to have been killed or died during the Islamic State group’s rule over the northern city, once the de facto capital of the extremist group’s so-called Islamic caliphate and the site of atrocities committed by the group against residents who opposed its extremist ideology.

The group at the time commanded large swathes of territory in Syria and Iraq that it administered based on its own radical version of Islamic rule.

US-backed Syrian forces retook Raqqa from IS in 2017 after a lengthy campaign that left the city in ruins. Since then, an organisation known as the Civil Council of Raqqa has been working to uncover mass graves in and around the city, amid concerns about the preservation of bodies and evidence for possible war crimes trials. International human rights groups say they are concerned that local groups are not getting the support they need in terms of forensic expertise and human resources.

Yasser al-Khamees, who leads a team of first responders, said workers have unearthed 4,760 bodies from a series of mass graves, starting from January 2018.

The mass grave discovered in mid-June in al-Fukheikha agricultural fields south of the city, is the latest grave located in and around Raqqa to date.

An Associated Press video showed workers on a recent day wearing surgical masks using shovels to dig up bodies from the field. Forensic workers then put the remains in white body bags, marking them with the date and location and other details.

Asaad Mohammed, a forensic worker, said workers were exhuming an average of 10 to 12 bodies on a daily basis.

“We inspect the body, identify the sex, age, time of death, cause of death. We take samples from each body and give it a number, we document it on official papers and then save the information on a computer database, along with samples taken from this area,” he said.

The bodies are then reburied in another plot of land outside the city for future identification.