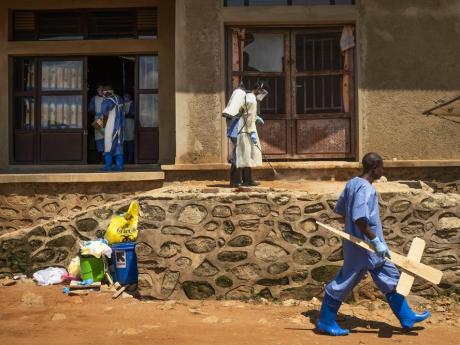 In this photograph taken Sunday, July 14, 2019, a morgue employee walks with a cross past others disinfecting the entrance to the morgue in Beni, Congo (AP Photo/Jerome Delay)

GENEVA (AP) — The deadly Ebola outbreak in Congo is now an international health emergency, the World Health Organization announced on Wednesday after the virus spread this week to a city of two million people.

A WHO expert committee had declined on three previous occasions to advise the United Nations health agency to make the declaration for this outbreak, which other experts say has long met the conditions.

More than 1,600 people have died since August in the second-deadliest Ebola outbreak in history, which is unfolding in a region described as a war zone.

This week the first Ebola case was confirmed in Goma, a major regional crossroads in northeastern Congo on the Rwandan border with an international airport.

Health experts have feared this scenario for months.

A declaration of a global health emergency often brings greater international attention and aid, along with concerns that nervous governments might overreact with border closures.

While the risk of regional spread remains high the risk outside the region remains low, WHO chief Tedros Adhanom Ghebreyesus said after the announcement in Geneva.

“The (international emergency) should not be used to stigmatise or penalise the very people who are most in need of our help,” he said.

This is the fifth such declaration in history.