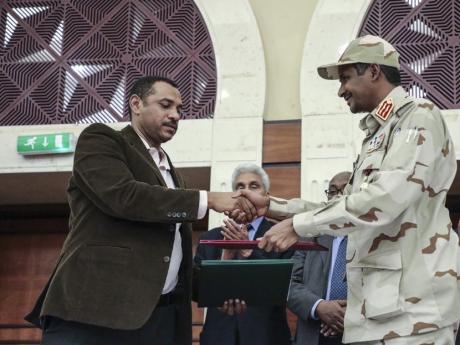 CAIRO (AP) — Sudan’s pro-democracy movement and the ruling military council signed a document early Wednesday that outlines a power-sharing deal, but the two sides are still at work on a more contentious constitutional agreement that would specify the division of powers.

The signing ceremony held in the capital, Khartoum, after marathon overnight talks, marks an important step in the transition to civilian rule following the military overthrow of long-ruling autocrat Omar al-Bashir amid mass protests in April.

But, the military appears to have the upper hand, following weeks of negotiations and a deadly crackdown last month in which security forces violently dispersed the protesters’ main sit-in.

The document signed Wednesday would establish a joint civilian-military sovereign council that would rule Sudan for a little over three years while elections are organised.

A military leader will head the 11-member council for the first 21 months, followed by a civilian leader for the next 18.

It marks a significant concession by the protesters, who had demanded an immediate transition to civilian rule.

The pro-democracy movement would appoint a Cabinet, and the two sides would agree on a legislative body within three months of the start of the transition.