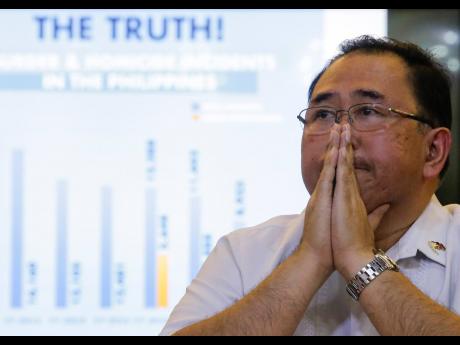 The Associated Press
Undersecretary Severo Catura, executive director of the Presidential Human Rights Committee secretariat, gestures as he listens to questions from reporters during a news conference in metropolitan Manila, Philippines, Thursday, July 18, 2019. A Philippine official says thousands of police officers have received administrative punishments, and more than 2,000 were dismissed, for wrongdoings during raids where drug suspects were killed.

Thousands of Philippine police officers have received administrative punishments with more than 2,000 dismissed for wrongdoings during raids, where drug suspects were killed under the president’s crackdown, officials said Thursday.

Communications assistant Secretary Marie Rafael Banaag told a news conference that 14,724 police were investigated for their involvement in police drug operations that led to deaths from July 2016 until last April. She said 7,867 of them received administrative punishments for unspecified lapses.

A tally presented by Banaag showed that 2,367 police officers have been fired, 4,100 suspended, while the rest were reprimanded, demoted, had their salaries forfeited, or deprived of certain privileges.

Banaag did not say how many officers have been criminally charged for serious lapses or outright crimes committed while enforcing the crackdown, which was launched by President Rodrigo Duterte as his centrepiece programme when he took office in mid-2016.

Philippine police officials say about 6,600 drug suspects have been killed in raids carried out by the police, mostly in gunbattles that ensued after the suspects fought back and endangered the lives of law enforcers. Banaag and other officials reported a lower death toll, more than 5,500, saying authorities were still verifying other drug-related deaths.

Last year, a Philippine court found three police officers guilty of killing a student they alleged was a drug dealer in the first known such conviction under the crackdown.

The court ruled the officers murdered Kian Loyd delos Santos during a raid in Caloocan city’s slums in the Manila metropolis, and rejected the policemen’s claim that the 17-year-old fired back while resisting arrest. Delos Santos’ family and witnesses testified in official investigations that he was shot in a dark alley near a creek as he pleaded for his life.

Delos Santos’ killing and that of a South Korean, allegedly strangled to death by an anti-drugs officer in an extortion attempt, prompted Duterte to briefly suspend the drug crackdown amid outcries.

National police chief Oscar Albayalde said criminal complaints will be filed separately against at least two officers after a three-year-old girl, Myca Ulpina, was killed in a police raid in late June in which her father, a drug suspect, was gunned down along with another civilian and a police officer in Rodriguez town east of Manila.