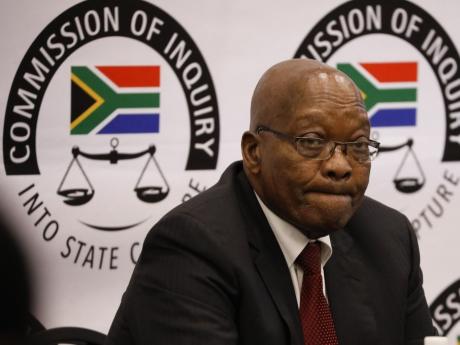 Former South African president Jacob Zuma at the state commission that is probing wide-ranging allegations of corruption in government and state-owned companies in Johannesburg, Friday, July 19, 2019. (Pool Photo via AP)

JOHANNESBURG (AP) — Former South African president Jacob Zuma on Friday abandoned his testimony to a state commission probing corruption allegations against him, asserting that he was being treated unfairly.

But a deal was quickly reached for him to return at some point in the future.

The commission is probing wide-ranging allegations of graft in government and state-owned companies that sparked national outrage and forced Zuma from office.

His lawyers said the former president will no longer participate in the inquiry but the commission chair, deputy chief justice Raymond Zondo, later said an agreement had been reached that will allow Zuma to return at a later stage.

If the parties can’t agree on when, Zondo said, he would do so.

Zuma will be provided with an outline of the specific issues on which he will be questioned.

He was president from 2009 to 2018, when he resigned under pressure from his ruling African National Congress party and was replaced by his then-deputy, Cyril Ramaphosa.

The current president has repeatedly vowed to fight corruption and win back public confidence.

Zuma began his testimony this week by calling the allegations part of an international intelligence conspiracy that began more than 25 years ago to assassinate his character.

On Friday he threatened to expose “spies” if the pressure on him went too far.

Zuma has been questioned about his close relationship with the wealthy Gupta family and allegations that they exerted influence over cabinet appointments and the awarding of lucrative state contracts.

The outcry over alleged corruption has shaken both the economy of South Africa, the most developed in sub-Saharan Africa, and public support for the ANC.