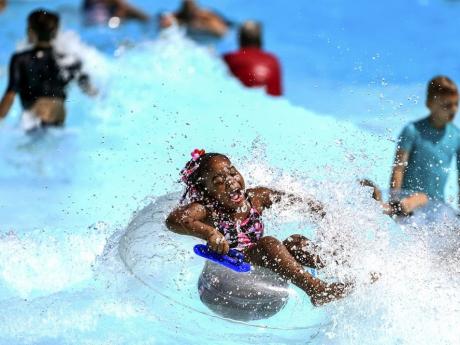 Destinee Lucas, 6, of Aliquippa, Pennsylvania, rides a wave at the pool at Settlers Cabin Park, Thursday, July 18, 2019, in Robinson, Communities nationwide are bracing for a record-breaking heatwave that's already roasting much of the U.S. to continue through the weekend. (Alexandra Wimley/Pittsburgh Post-Gazette via AP)

Governor Andrew Cuomo says the extended hours will begin Friday and continue through Sunday at more than 30 parks statewide.

Temperatures are expected to climb into the 90s around much of the state Friday as much of the nation deals with high heat.

High temperatures are expected to linger through the weekend.

The combination of heat and humidity could make it feel like 112 degrees.

A coroner says he had worked outside all day at his family shop.