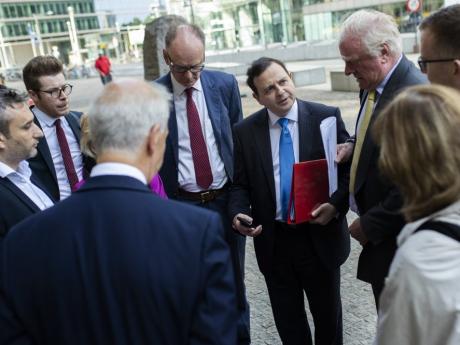 BRUSSELS (AP) — British lawmakers met the European Union’s chief Brexit negotiator on Friday, seeking an iron-clad guarantee that the 1.3 million U.K. citizens in the bloc won’t have their rights removed and their lives disrupted if Britain leaves the EU without a deal.

The rights of U.K. citizens living in the 27 other EU nations, and those of the more than 3 million EU citizens in Britain, are one of the thorniest issues of the Brexit negotiations.

Their rights to live, work and study are protected under an agreement struck between the two sides — but the divorce agreement has been rejected by Britain’s Parliament, raising the prospect of a no-deal Brexit.

The U.K. is due to leave the bloc on Oct. 31, and both men vying to take over as prime minister next week, Boris Johnson and Jeremy Hunt, say it’s imperative that Brexit happens, with or without a deal.

Talks between the British government and the EU on guaranteeing citizens’ rights if the U.K. crashes out of the bloc have failed to produce a breakthrough.

EU leaders insist the withdrawal agreement can’t be chopped into chunks — Britain must accept all of it or none.