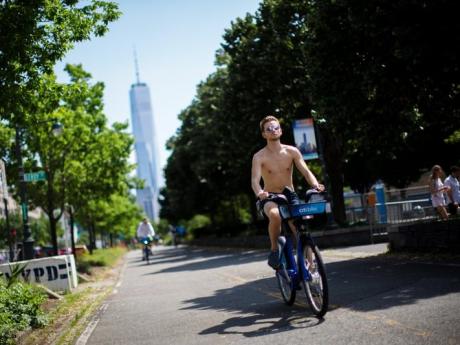 Cyclists ride down a path near the Hudson River during high temperatures on Saturday, July 20, 2019, in New York. (AP Photo/Eduardo Munoz Alvarez)

NEW YORK (AP) — Mayor Bill de Blasio called for an investigation Monday of power outages that came at the end of this weekend’s oppressive heat, saying he no longer trusts utility Con Edison after it decided to turn off power to thousands of customers.

Around 30,000 customers in Brooklyn were taken off power Sunday, so the utility could make repairs and prevent a bigger outage, de Blasio had said earlier.

On Monday, he offered a blistering assessment of that decision.

“This should not have happened,” he told reporters, “and we need to make sure it doesn’t happen again.”

De Blasio said the private company is “not accountable to the public in a way a public agency would be.”

“Con Ed is very haughty about this,” the mayor said.

“They don’t give real answers, and they don’t feel they have to.”

De Blasio’s remarks came as Con Ed was working to restore power to about 20,000 customers, many of them in southeast Brooklyn.

Their power was disconnected a day earlier to prevent a larger blackout amid high heat and humidity.

The utility said in an emailed statement that it was working to restore power to everyone by the afternoon.

Like much of the East Coast, New York City experienced temperatures in the high 90s over the weekend — and felt much hotter with the humidity.