Duterte: No way to stop China from fishing in exclusive zone 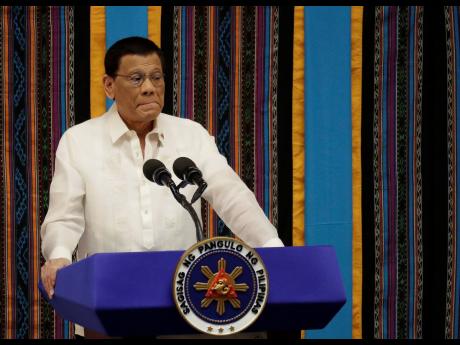 Philippine President Rodrigo Duterte said Monday that there was no way to stop Chinese nationals from fishing in his country’s exclusive economic zone claimed by China and added that he would not risk losing Filipino forces in a clash with the Asian superpower in the disputed South China Sea.

“When Xi says, ‘I will fish, who can prevent him?’” Duterte said as he defended his nonconfrontational approach to China over the territorial disputes in his annual State of the Nation Address before a joint session of Congress. He was referring to Chinese President Xi Jinping.

“If I send my marines to drive away the Chinese fishermen, I guarantee you not one of them will come home alive,” Duterte said, adding that diplomatic talks with Beijing have allowed the return of Filipinos to disputed fishing grounds where Chinese forces previously shooed them away.

Critics have repeatedly criticised Duterte, who has nurtured friendly ties with Beijing, for not standing up to China’s aggressive behaviour in the disputed waters and deciding not to immediately seek Chinese compliance with an international arbitration ruling that invalidated Beijing’s historic claims to virtually the entire sea. China has refused to recognise the 2016 ruling.

The decision also found that China had breached its duty to respect the traditional fishing rights of Filipinos when Chinese forces blocked them from the disputed Scarborough Shoal off the northwestern Philippines in 2012. The Philippines, however, could also not deny Chinese fishermen access to Scarborough, according to the ruling. But the decision did not specify any traditional fishing areas within the Philippines’ exclusive zone where the Chinese could be allowed to fish.

An exclusive economic zone is a 200-nautical-mile (370-kilometre) stretch of water where a coastal state has exclusive rights to fish and exploit other resources, as well as undersea gas and oil-based on the 1982 United Nations Convention on the Law of the Sea.

On his battle against illegal drugs and corruption, Duterte asked Congress to allow the ­reimposition of the death penalty for drug-related heinous crimes and economic plunder. He said that the drug menace, which he called a “social monster”, could not be crushed unless corruption was eliminated.

The Philippines’ long-­simmering territorial rifts with China and Duterte’s centerpiece campaign against illegal drugs and corruption were spotlighted in his speech. But he also asked for Congress’s help in dealing with diverse social ills and governance issues ranging from slow Internet services and delays in releases of government clearances to traffic jams.

Duterte outlined problems he had resolved, sometimes through scare tactics, like the easing of a water shortage last summer in Manila, the capital, after he threatened to fire officials.

Although the annual speech is traditionally replete with protocol and formality, he injected sexual jokes, curses and threats that have been the trademark of his often-rambling speeches. During the Manila water crisis, for example, he said he did not want to travel to the city. “What if my girlfriend will not be able to take a bath, she will smell like hell,” he said.

When he asked Congress to pass new tax reforms that would further raise excise taxes on tobacco and alcohol, Duterte asked if there were any smokers in the audience, which included foreign diplomats: “Who smokes here? They should be exterminated from the face of the earth.”

Duterte, 74, took office in June 2016 and has remained hugely popular in opinion polls despite drug-war deaths that have sparked international alarm and other ­controversial policies.