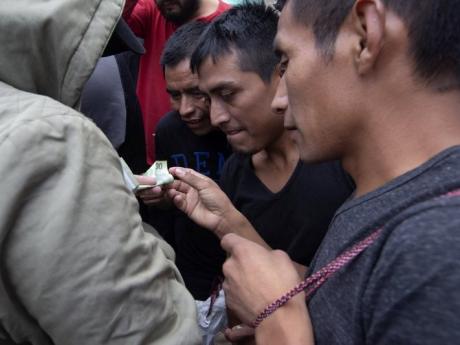 Guatemalan men who were deported from the United States, change money after arriving at the Air Force Base in Guatemala City, Tuesday, July 16, 2019. (AP Photo/Moises Castillo)

Trump billed the operation as a major show of force in an effort to “deport millions” of people in the country illegally as the number of Central American families crossing the southern border has skyrocketed.

Of those arrested, 18 were members of families and 17 were collateral apprehensions of people in the country illegally encountered by Immigration and Customs Enforcement officials.

None of those arrested resulted in a separation of family, officials said.

While the operation was demonised by Democrats as a full-force effort to deport families and trumpeted by Republicans as a necessary effort to show there are consequences for people here illegally, career ICE officers described it as a routine operation, one expected to net an average of about 10 to 20% of targets.

It targeted families who had been ordered deported by an immigration judge in 10 cities around the country who were subjected fast-track proceedings.

It was cancelled once after media reports telegraphing when and where it would begin, though Trump announced it would be postponed following a phone call with House Speaker Nancy Pelosi who urged him to do so.

The second round began July 14 and again was met with media attention noting when it would begin, including from Trump who announced the date.