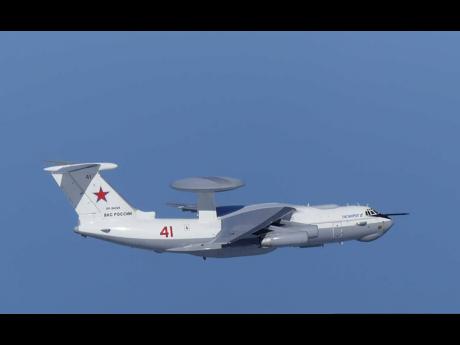 The Associated Press
This image released by Joint Staff, Ministry of Defence, shows Russian A-50 airborne early warning and control aircraft flying near the Korean-controlled island called Takeshima in Japan yesterday. Japan has protested to Russia for allegedly violating Japanese airspace and to South Korea for firing warning shots there.

South Korea said three Russian military planes – two Tu-95 bombers and one A-50 airborne early warning and control aircraft – entered the South’s air defence identification zone off its east coast before the A-50 intruded in South Korean airspace. Russia said later that two of its Tu-95MS bombers were on a routine flight over neutral waters and didn’t enter South Korean territory.

According to South Korean government accounts, an unspecified number of South Korean fighter jets, including F-16s, scrambled to the area and fired 10 flares and 80 rounds from machine guns as warning shots.

South Korea said it was the first time a foreign military plane had violated South Korean airspace since the end of the 1950-53 Korean War.

South Korea’s foreign ministry and the joint chiefs of staff summoned Russia’s acting ambassador and its defence attache to protest.

Russia’s defence ministry said in a statement that its planes did not enter South Korean airspace. It also said South Korean fighter jets didn’t fire any warning shots, though it said they flew near the Russian planes in what it called “unprofessional manoeuvres” and posed a threat.

“If the Russian pilots felt there was a security threat, they would have responded,” the statement said.