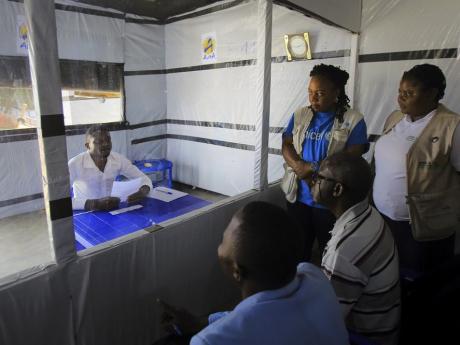 In this Saturday, July 20, 2019 photo, Claude Mabowa Sasi, 21, who had lost his mother, a brother and a sister to Ebola, takes his college-entry exam in an isolation room at an Ebola treatment center in Beni, Congo. (AP Photo/Al-Hadji Kudra Maliro)

BENI, Congo (AP) — Claude Mabowa Sasi had lost his mother, a brother and a sister to Ebola. Instead of fearing death when he, too, was diagnosed with the disease, the young man had a different worry: How would he complete his college entrance exams?

It had been his mother’s greatest hope that Mabowa would go to college. To do so would require passing the secondary school baccalaureate, or “bac.”

But the exams are held only once a year in Congo, and the 21-year-old Mabowa was being held in medical isolation, unable to sit in the same room with other test-takers.

So the medical staff members caring for him at an Ebola treatment center run by the Alliance for International Medical Action, or ALIMA, came up with a solution.

They found a school official willing to proctor the exam as Mabowa took it safely behind a window.

The papers were passed to Mabowa without touching him.

After finishing, he held his pages up one by one to the window so they could be photographed with a smartphone and then emailed to officials for scoring.

Then his work and his pencil were incinerated.

For the oral part of the exam, the questions were asked of him through the glass.

On Saturday, Mabowa completed the last of his exams.

He is awaiting the results while still in isolation, where he will stay until the virus is gone from his body.

He hopes to study political science at the University of Kisangani.