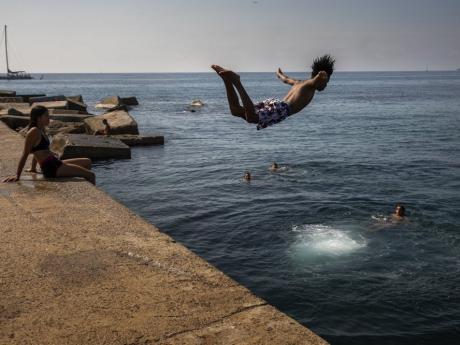 A boy jumps into the water at the beach in Barcelona, Spain, Thursday, July 25, 2019. Parts of Europe will likely see record-high temperatures on Thursday as much of the continent is trapped in a heat wave, the second in two months. (AP Photo/Emilio Morenatti)

Temperature records that had stood for decades or even just hours fell minute by minute Thursday afternoon and Europeans and tourists alike jumped into fountains, lakes, rivers or the sea to escape a suffocating heat wave rising up from the Sahara.

On a day that no one on the continent will ever forget, two potential drug dealers in Belgium even called the police, begging to be rescued from the locked container they managed to get themselves trapped in.

It was nearly impossible to keep up with the falling records as temperatures climbed higher and higher under a brutal sun — in Paris and London, in Belgium, Germany, the Netherlands — all places where air conditioning is not typically installed in homes, cafes or stores.

Even office air conditioning systems strained under the hot, dry air that was trapped between two stormy weather systems.

Climate scientists warned these types of heat waves could become the new normal but they loom as a giant challenge for temperate Europe.

As emissions keep warming the planet, scientists say there will be more and hotter heat waves, although it’s too early to know whether this specific hot spell is linked to man-made climate change.