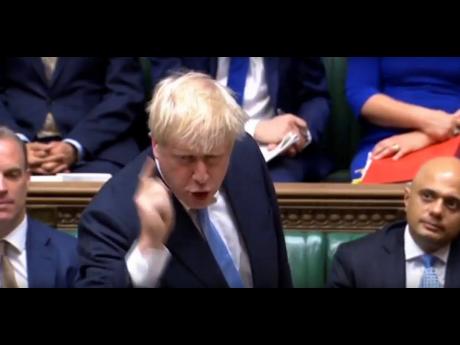 British Prime Minister Boris Johnson urged the European Union (EU) yesterday to rethink its refusal to renegotiate the Brexit deal, setting himself on a collision course with both the bloc and his own lawmakers over his vow to leave the EU by October 31.

Addressing a rowdy session of Parliament for the first time since becoming prime minister a day earlier, Johnson pledged to deliver Brexit and a “broader and bolder future”.

He was heckled loudly by an opposition determined to thwart him, with Labour Party leader Jeremy Corbyn dismissing Johnson’s “arm-waving bluster”.

Rejecting the Brexit withdrawal agreement negotiated by his predecessor Theresa May, Johnson insisted that while he wanted a deal, it could only happen if the EU budged, especially on an insurance policy for the Irish border that has been rejected by United Kingdom (UK) lawmakers.

“I hope that the EU will be equally ready and that they will rethink their current refusal to make any changes to the withdrawal agreement,” he told Parliament during the more than two-hour session. “If they do not, we will, of course, have to leave – the UK – without an agreement.”

Without a divorce deal, Britain faces a chaotic Brexit that economists warn would disrupt trade by imposing tariffs and customs checks between Britain and the bloc. They say that could send the value of the pound plummeting and plunge the UK into recession.

Nonetheless, Johnson, who won an election of Conservative members to replace May as party leader and prime minister, has vowed to complete Brexit and silence “the doubters, the doomsters, the gloomsters” who believe it can’t be done.

But details remain scarce about how Johnson’s government would alleviate the economic shock if Britain crashed out of the EU’s huge free-trading bloc, ripping up decades of agreements regulating everything from aviation to drugs to telecommunications.

Johnson has less than 100 days to make good on his promise to deliver Brexit by October 31. Yet, Britain will struggle to get the bloc’s full attention during August, a sleepy holiday period in much of Europe, and the UK Parliament is due to start a six-week summer break on Friday.