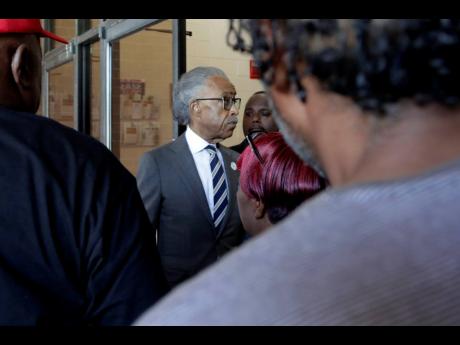 AP
Reverend Al Sharpton (centre), president of National Action Network, enters New Shiloh Baptist Church after talking to reporters yesterday in Baltimore. After a weekend of attacks on Rep Elijah Cummings, President Donald Trump expanded his attacks Monday to include Sharpton, a prominent Cummings defender, who visited Baltimore to hold a press conference in condemnation of the president.

Facing growing accusations of racism for his incendiary tweets, President Donald Trump lashed out at his critics yesterday and sought to deflect the criticism by labelling a leading black congressman as himself racist.

In the latest rhetorical shot at lawmakers of colour, Trump said his weekend comments referring to Rep Elijah Cummings’ majority-black Baltimore district as a “disgusting, rat and rodent infested mess”, where “no human being would want to live” were not racist. Instead, Trump argued, “if racist Elijah Cummings would focus more of his energy on helping the good people of his district, and Baltimore itself, perhaps progress could be made in fixing the mess”.

After a weekend of attacks on Cummings, the son of former sharecroppers who rose to become the powerful chairman of the House Oversight and Reform Committee, Trump expanded his attacks Monday to include a prominent Cummings defender, the Rev Al Sharpton, who was travelling to Baltimore to hold a press conference in condemnation of the president.

Trump appeared to dig a deeper hole even as a top White House aide sought to dismiss the controversy by describing Trump’s comments as hyperbole. Two weeks ago, Trump caused a nationwide uproar with racist tweets directed at four Democratic congresswomen of colour as he looked to stoke racial divisions for political gain heading into the 2020 election.

“I assume that Bernie must now be labelled a racist, just as a Republican would if he used that term and standard,” Trump tweeted Monday.

Sanders tweeted back that “Trump’s lies and racism never end. While I have been fighting to lift the people of Baltimore and elsewhere out of poverty with good paying jobs, housing and healthcare, he has been attacking workers and the poor.”

Earlier this month, Trump drew bipartisan condemnation following his call for Democratic Reps. Ilhan Omar of Minnesota, Alexandria Ocasio-Cortez of New York, Ayanna Pressley of Massachusetts, and Rashida Tlaib of Michigan to get out of the US “right now.” He said that if the lawmakers “hate our country,” they can go back to their “broken and crime-infested” countries.

All four lawmakers of colour are American citizens. Three of the four were born in the US.