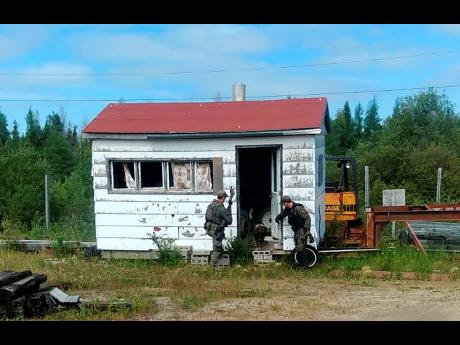 AP
In this recent photo provided by the Royal Canadian Mounted Police, officers canvass homes and buildings in the Gillam area of Manitoba area as they continue to search for two teenagers being sought in the killings of three people in northern British Columbia.

Canadian police urged people in a remote northern town to stay inside and lock their doors yesterday as officers hunted for two teenagers who are suspects in the murder of three people in British Columbia.

Police Cpl Julie Courchaine told a news conference in Winnipeg that the agency received a tip Sunday afternoon that Kam McLeod and Bryer Schmegelsky may have been spotted in York Landing – about 55 miles from Gillam, where a vehicle that had been used by the suspects was found burned last week.

The Royal Canadian Mounted Police issued a tweet saying “it is critical” that residents in York Landing “stay indoors as much as possible with their doors locked”.

The community of about 500 people is accessible only by air or a ferry, though a rail line runs about 15 miles (25 kilometres) away.

Nineteen-year-old McLeod and 18-year-old Schmegelsky have been charged with second-degree murder in the death of Leonard Dyck, whose body was found last week in British Columbia.

They are also suspects in the fatal shootings of Australian Lucas Fowler and his American girlfriend Chynna Deese of Charlotte, North Carolina, whose bodies were found on July 15 along the Alaska Highway about 500 kilometres (300 miles) from Dyck’s killing.