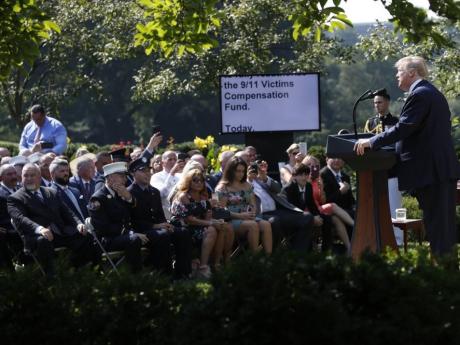 President Donald Trump speaks before signing H.R. 1327, an act ensuring that a victims' compensation fund related to the September 11 attacks never runs out of money, in the Rose Garden of the White House, Monday, July 29, 2019, in Washington. (AP Photo/Pablo Martinez Monsivais)

WASHINGTON (AP) — President Donald Trump on Monday signed a bill ensuring that a victims’ compensation fund related to the September 11, 2001 attacks never runs out of money, ending years of legislative gridlock as the number of first responders dying of Ground Zero-related illnesses mounted.

Appearing in the Rose Garden with more than 60 first responders from the 2001 terrorist attacks, Trump signed into law an extension of the fund through 2092, essentially making it permanent.

“You inspire all of humanity,” Trump said of the “true American warriors” who rushed to assist victims that day and searched for remains for months after.

The president said that the nation has a “sacred obligation” to care for the responders and their families.

The $7.4 billion fund had been rapidly depleting , and administrators recently cut benefit payments by up to 70%.

The bill passed Congress on a bipartisan basis but only after delays by some Republicans exposed the legislative branch to brutal criticism from activists, including the comedian Jon Stewart.

Dozens of first responders, many gravely ill, would repeatedly travel to Washington to lobby lawmakers to extend the funding every time it needed to be reauthorised.

Though their ranks shrunk, as emergency workers died of cancers and other diseases linked to the toxic fumes from the World Trade Center rubble, the fate of the funding had never been permanently guaranteed.