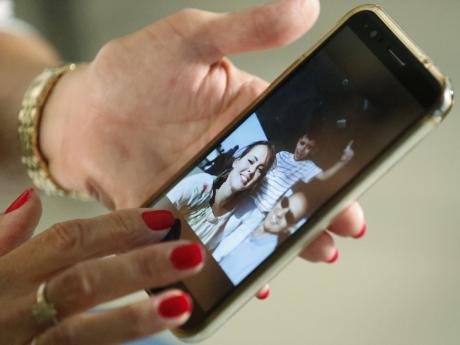 In this June 20, 2019 photo, Mary Sardinas, 60, shows a photo of her son, daughter-in-law and grandson in Cuba as she speaks during an interview with The Associated Press in Miami. (AP Photo/Wilfredo Lee)

MIAMI (AP) — Mary Sardinas had prepared a room in her Miami house for the arrival of her son from Cuba.

He’d sold his home and left his job thinking he’d soon be living in the United States.

That was two years ago and he’s still in Cuba.

Sardinas is among thousands of Cubans living in the United States whose hopes of reuniting with family members have been put on hold since September 2017, when the Trump administration pulled most of its embassy staff out of Cuba in response to a mysterious illness that struck at least two dozen diplomats or their relatives.

“Why can’t we live as a family? What does he have to do? Dive in (the sea) and risk his life?” she asked.

Her 41-year-old son, Jorge Luis Carrera Sardinas, had passed his final interview for the permit and was just waiting to go to the embassy to receive it.

For most of the decades after the 1959 revolution led by Fidel Castro, Cubans fleeing the communist-governed island enjoyed unique immigration privileges, including an almost certain path to legal residence once they touched US territory.

But the outgoing administration of President Barack Obama cancelled that policy in January 2017 and the Trump administration’s consular shutdown later that year means that legal migration has been severely restricted.

The U.S. government’s Cuban Family Reunification Parole program remains in place, but there are no consular officials on the island to process the cases and authorities haven’t announced any other place where the paperwork can be filed, though other sorts of visas can be handled in countries such as Colombia or Guyana.

It’s also not clear when the diplomats might return.