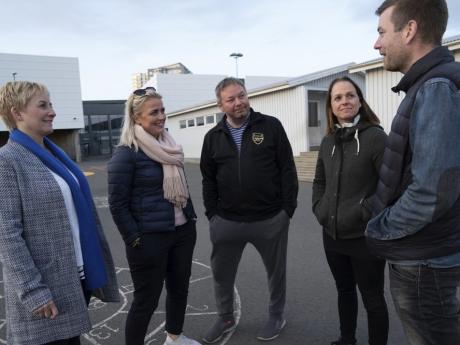 REYKJAVIK, Iceland (AP) — The clock strikes 10 p.m. on a Friday night when the “Parent Patrol” enters a popular playground in suburban Reykjavik.

The teens turn down the music and reach for their phones to check the time: It’s ticking into curfew.

Every weekend, parents all over the Icelandic capital embark on a two-hour evening walk around their neighbourhood, checking on youth hangouts.

The walk is one step toward Iceland’s success into turning around a crisis in teenage drinking.

Focusing on local participation and promoting more music and sports options for students, the island nation in the North Atlantic has dried up a teenage culture of drinking and smoking.

Icelandic teens now have one of the lowest rates of substance abuse in Europe.

“The key to success is to create healthy communities and by that get healthy individuals,” said Inga Dora Sigfusdottir, a sociology professor who founded the “Youth of Iceland” programme, which now has rebranded as “Planet Youth.”

The secret, she says, is to keep young people busy and parents engaged without talking much about drugs or alcohol.

That stands in sharp contrast to other anti-abuse programmes, which try to sway teenagers with school lectures and scary, disgusting ads showing smokers’ rotten lungs or eggs in a frying pan to represent an intoxicated brain.

“Telling teenagers not to use drugs can backlash and actually get them curious to try them,” Sigfusdottir said.

In 1999, when thousands of teenagers would gather in downtown Reykjavik every weekend, surveys showed 56% of Icelandic 16-year-olds drank alcohol and about as many had tried smoking.

Years later, Iceland has the lowest rates for drinking and smoking among the 35 countries measured in the 2015 European School Survey Project on Alcohol and Other Drugs.

On average, 80% of European 16-year-olds have tasted alcohol at least once, compared with 35% in Iceland, the only country where more than half of those students completely abstains from alcohol.

Denmark — another wealthy Nordic country — has the highest rates of teen drinking, along with Greece, Hungary and the Czech Republic, where 92% to 96% have consumed alcohol.