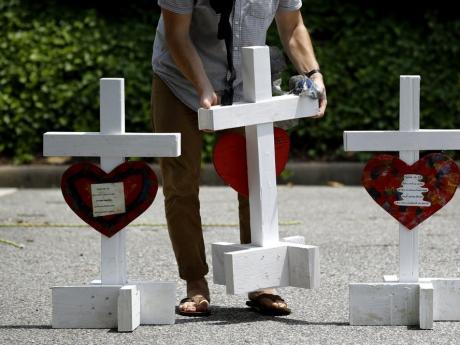 In this June 2, 2019, file photo, a volunteer prepares to place crosses for victims of a mass shooting at a municipal building in Virginia Beach, Va., at a nearby makeshift memorial. (AP Photo/Patrick Semansky, File)

SEATTLE (AP) — The United States has recorded nearly 20 mass killings so far this year, the majority of them domestic violence attacks that receive scant national attention compared to high-profile public shootings in recent years at schools, churches and concerts.

A database compiled by The Associated Press, Northeastern University and USA Today shows that the number of mass killings has held steady in 2019 compared with past years.

But if the trend continues, the year could end with a lower death count because there have been fewer mass-casualty attacks such as those in Las Vegas, Parkland, Florida, and the Pulse Nightclub in Orlando.

Four mass shootings happened in public places so far this year, compared with 10 in 2018 and seven in 2017.

But 2019 saw a big increase in the number of mass killings in domestic disputes, helping to keep this year’s overall numbers similar to past years.

There have been 10 family mass killings this year; there were 10 during all of 2017.

In July alone, 13 people were slain in three killings involving domestic violence or drugs in Missouri, Wisconsin and Washington state, but those stories drew little attention.

Meanwhile, a gunman killed three people and wounded 12 at a garlic festival in California, with smartphones and social media quickly spreading the word.