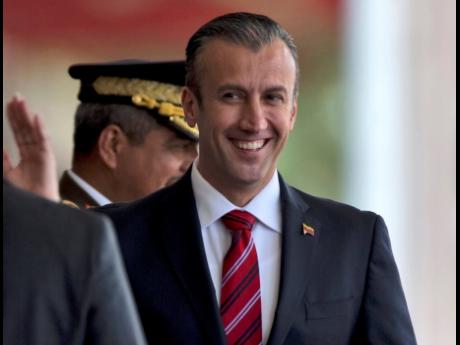 The Associated Press
In this February 1, 2017, file photo, Venezuela’s then Vice-President Tareck El Aissami arrives at a military parade at Fort Tiuna in Caracas, Venezuela. United States Immigration and Customs Enforcement (ICE) has included El Aissami among its 10 most wanted fugitives.

ICE posted a Twitter link to a ‘wanted’ profile on El Aissami with the hashtag #MostWantedWednesday. It cautions: “Do not attempt to apprehend any subject.”

El Aissami, who is now Venezuela’s minister of industry and national production, was charged earlier this year in New York federal court with violating the Foreign Narcotics Kingpin Designation Act and US Treasury Department sanctions by hiring US companies to provide private jets.

Before the federal charges were brought in March, the US government had labelled him a “specially designated narcotics trafficker” under the Kingpin Act for allegedly playing a major role in global drug trafficking. Aissami has denied that charge.

ICE’s list of 10 most wanted fugitives also includes Venezuelan businessman Samark José López Bello, who was charged in New York federal court and designated as a narcotics trafficker along with El Aissami.

López told The Associated Press that he was innocent and that the designation issued by US Treasury Department was groundless.

“Samark López trusts the US justice system and will seek all available legal avenues to clean his name and resume his businessman activities with total normalcy,” he wrote in a statement.