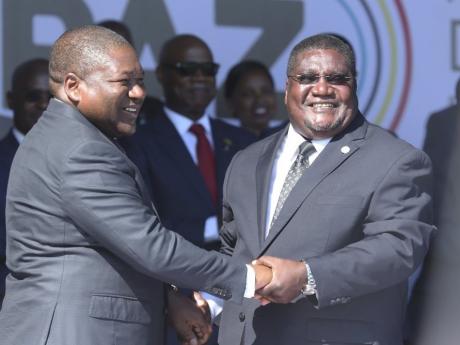 The ceremony, held in a national wildlife park that was a rebel stronghold and a center of the conflict, brought hope for a new era of peace and economic growth in one of the world’s poorest countries, where an estimated 70% of the population lives on less than $2 per day.

It came as more than 5,200 of the former rebel group’s fighters were disarming just weeks before a visit by Pope Francis and a national election that will test the resolve of the two parties to sustain the peace.

“We are living in a moment of hope. This is the moment of our reconciliation,” President Filipe Nyusi told a cheering, ululating crowd in Gorongosa National Park, which he said was chosen for the signing because it was where the conflict began and would now be a “sanctuary of peace and biodiversity.”

Renamo leader Ossufo Momade also pledged that the warring sides had put aside their hostilities.

“We are now brothers in peace,” he declared.

“With this signing we are showing all Mozambicans and the world that we have buried our legacy of violence and now we are committed to dialogue to resolve our differences.”

The permanent cease-fire was the culmination of years of negotiations to end the fighting that has flared sporadically in the 27 years since the civil war ended in 1992.

After signing the accord, Nyusi and Momade shook hands and embraced at the foot of Mount Gorongosa, where the rebels maintained their military headquarters.

Some 800 of the disarming fighters were to live in a tented demobilisation camp next to the wildlife park.