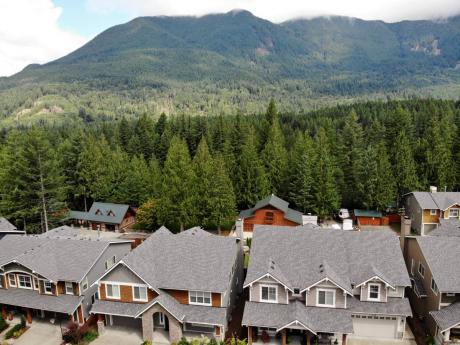 AP
In this photo taken on July 24, 2019, houses are backed up to a forest in the Cascade foothills of North Bend, Washington. Experts say global warming is changing the region’s seasons, bringing higher temperatures, lower humidity and longer stretches of drought.

Nestled in the foothills of Washington’s Cascade Mountains, the bustling Seattle suburb of Issaquah seems an unlikely candidate for anxiety over wildfires.

The region, famous for its rainfall, has long escaped major burns even as global warming has driven an increase in the size and number of wildfires elsewhere in the American West.

But according to experts, previously too-wet-to-burn parts of the Pacific Northwest face an increasing risk of significant wildfires due to changes in its climate driven by the same phenomenon: Global warming is bringing higher temperatures, lower humidity and longer stretches of drought.

And the region is uniquely exposed to the threat, with property owners who are often less prepared for fire than those in drier places and more homes tucked along forests than any other western state.

In Issaquah and towns like it across the region, that takes a shape familiar from recent destructive California wildfires: heavy vegetation that spills into backyards, often pressing against houses in neighborhoods built along mountains, with strong seasonal winds and few roads leading out.

“The only thing that’s keeping it from going off like a nuclear bomb is the weather,” said Chris Dicus, a professor at California Polytechnic State University, San Luis Obispo and head of the Association for Fire Ecology, a national group that studies wildfire and includes experts from the US Forest Service and US Geological Survey.

With historically short summers, the swathe of densely forested, coastal territory stretching from British Columbia into northwestern Oregon has long been cloaked in a protective veil of moisture, making even medium-sized fires relatively rare. So-called ‘megafires’ – enveloping hundreds of thousands of acres and even generating their own weather – have occurred only at century-plus intervals.

But global warming is changing the region’s seasons. A national climate assessment prepared by 13 federal agencies and released in 2018 said the Pacific Northwest had warmed nearly two degrees Fahrenheit since 1900 and that trend would continue into the century, leading to warmer winters and less mountain snowpack.

Experts say these long-term changes create a special risk in Pacific Northwest forests, where past wet weather has created ample fuel for fires: Even a modest increase in contributing factors, like days without rain, could make them much more prone to burning.

“It’s a couple of degrees difference. It’s a couple of weeks’ difference,” said Michael Medler, a fire scientist and chair of the environmental studies department at Western Washington University. “Those are the kinds of changes that amount to taking a forest and pushing it over the edge.”

Exactly when any one part of the region will reach that point is hard to predict, and researchers stressed that unknowns exist in modeling fire in woods that have burned so infrequently. But all pointed to changes already beginning to take place.

This year’s fire danger, for instance, reached above-normal levels in the region a full three months earlier than at any time in more than 10 years, driven partly by an abnormally dry winter.

And fire counts are up: As of late June, western Oregon forests have seen double the average number of fire starts from the previous decade — 48 compared with 20. Western Washington saw an even larger increase, with 194 starts compared with an average of 74.

Even the region around Astoria, Oregon, which frequently gets 100-plus rainy days per year, making it one of the wettest parts of the state, has seen a dozen small fires in 2018 and 2019, according to data from the Oregon Department of Forestry. That compares with an average of just two per year over the previous decade.