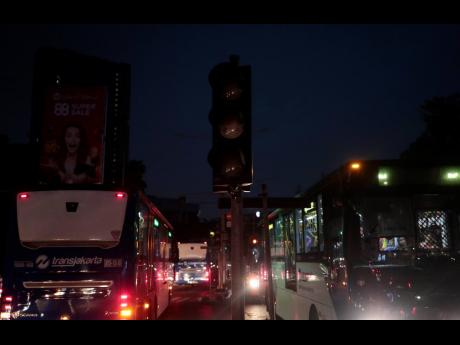 AP
A traffic light is seen turned off during a power outage in Jakarta, Indonesia, yesterday. Indonesia’s sprawling capital and other parts of Java island were hit by a massive power outage affecting millions of people.

Indonesia’s sprawling capital and other parts of Java island were hit by a widespread power outage on Sunday that affected tens of millions of people.

The eight-hour blackout began at around noon and caused disruptions in cell phone services and cash machines. The new mass subway system in Jakarta, the capital, had to shut down.

Muhammad Kamal, the spokesman for the company that operates the subway system, said the company managed to safely evacuate all of the passengers who were stuck in trains during the blackout.

Television footage showed that traffic lights went off in Jakarta and other parts of Java, causing traffic problems.

State-owned electricity company PLN’s spokesman, Made Suprateka, said in a statement that the blackout was caused by problems with a gas turbine at a major power plant and by a disruption at another facility on Java. He said authorities were investigating the cause of the trips in the turbines.

The outage hit not only the Jakarta metropolitan area, but also several other regions on Java.

Jakarta is a congested, polluted and sprawling metropolis of 10 million that swells to three times that number when counting those living in the larger metropolitan area. Java is one of the world’s most densely populated islands, home to more than 150 million people – more than half of Indonesia’s population of 267 million.