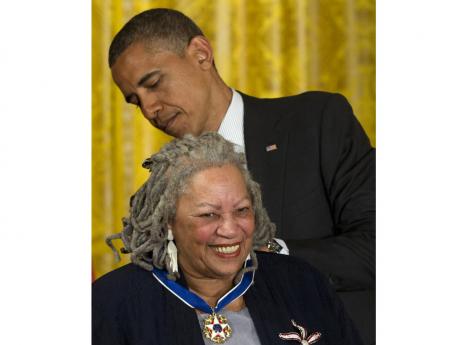 In this May 29, 2012 file photo President Barack Obama awards author Toni Morrison with a Medal of Freedom, during a ceremony in the East Room of the White House in Washington. (AP Photo/Carolyn Kaster, File)

NEW YORK (AP) — Nobel laureate Toni Morrison, a pioneer and reigning giant of modern literature whose imaginative power in “Beloved,” ″Song of Solomon” and other works transformed American letters by dramatising the pursuit of freedom within the boundaries of race, has died at age 88.

Morrison’s family issued a statement through Knopf saying she died after a brief illness.

“She was an extremely devoted mother, grandmother, and aunt who revelled in being with her family and friends. The consummate writer who treasured the written word, whether her own, her students or others, she read voraciously and was most at home when writing.”

She was nearly 40 when her first novel, “The Bluest Eye,” was published.

By her early 60s, after just six novels, she had become the first black woman to receive the Nobel literature prize, praised in 1993 by the Swedish academy for her “visionary force” and for her delving into “language itself, a language she wants to liberate” from categories of black and white.

In 2019, she was featured in an acclaimed documentary, “Toni Morrison: The Pieces I Am.”