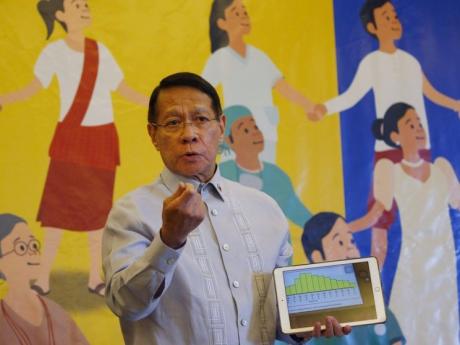 In this April 30, 2019 file photo, Philippine Health Secretary Dr Francisco Duque III displays a graph showing the decline of the measles outbreak in the country during a press conference during World Immunization Week 2019 in Manila, Philippines. (AP Photo/Bullit Marquez)

MANILA, Philippines (AP) — The Philippines’ Department of Health on Tuesday declared the country’s outbreak of dengue to be a national epidemic.

The agency said Health Secretary Francisco Duque III made the declaration to improve the response to the outbreak by allowing local governments to draw on a special Quick Response Fund.

It said the outbreak caused 622 deaths.

Dengue is a mosquito-borne viral infection found in tropical countries worldwide. It can cause joint pain, nausea, vomiting and a rash, and can cause breathing problems, haemorrhaging and organ failure in severe cases.

While there is no specific treatment for the illness, medical care to maintain a person’s fluid levels is seen as critical.

The Department of Health said that starting Tuesday, it was conducting a campaign to focus on finding and destroying mosquito breeding sites, which is a primary means of containing dengue.

Other government agencies, local government units, schools, offices and communities will join in the effort, it said.