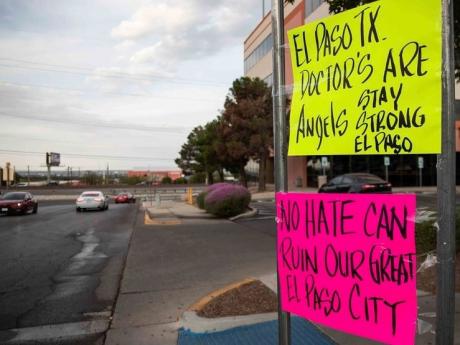 Someone left a couple of signs outside Del Sol Medical Center after a mass shooting occurred at Walmart early Saturday in El Paso, TX on Sunday, August 4, 2019. (Lola Gomez/Austin American-Statesman via AP)

In a release, the ministry said U.S. authorities can't prevent the shootings because of "indiscriminate possession of firearms" and advised Uruguayans to avoid large public events including shopping centres, art and food festivals, and religious gatherings.

Venezuela's Foreign Ministry also issued a statement suggesting that its citizens "postpone travel" to the U.S. in light of "violence and indiscriminate hate crimes."

The U.S has warned its citizens against any travel to Venezuela.