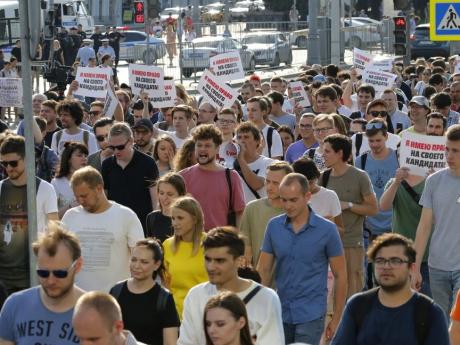 In this file photo dated Saturday, July 27, 2019, protesters hold posters that read: "I have the right to my candidate" during an unsanctioned rally in the center of Moscow, Russia. (AP Photo/Alexander Zemlianichenko, FILE)

MOSCOW (AP) — Moscow’s children’s rights ombudsman and other public figures have reacted with outrage to Russian prosecutors’ moves to remove a 1-year-old boy from his parents because they allegedly took him to an unauthorised protest.

Prosecutors claimed that Dmitri and Olga Prokazov endangered the child by taking him to the July 27 rally in the Russian capital that was violently dispersed by police and that they handed him to another man who is now being sought on charges of organising mass riots.

The case against the parents follows a tough police crackdown on rallies protesting the exclusion of opposition candidates from September’s city council election.

Police detained more than 1,400 people during the July 27 protest and rounded up a further 1,001 during another demonstration on Saturday, according to an independent monitoring group.

He said he has written to Moscow’s prosecutor urging him to drop the charges.

Members of the presidential human rights council also criticised the prosecutors’ action, which comes amid a slew of criminal cases launched in the wake of protests that challenged the Kremlin.