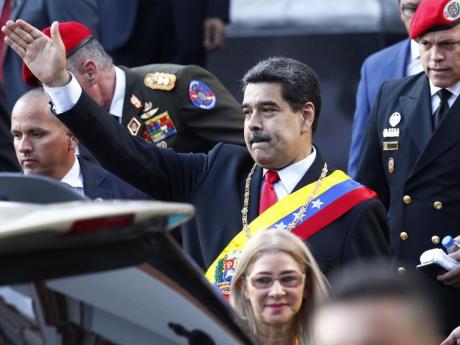 BOGOTA, Colombia (AP) — Venezuela’s government late Wednesday halted negotiations with the opposition in protest of the Trump administration’s freezing of its U.S. assets, thrusting into crisis the country’s best chance of peacefully resolving a political standoff that has kept the nation on the edge for more than six months.

The government stopped short of abandoning the talks altogether, saying only that it would “review the mechanisms of this process to ensure its continuation is truly effective and harmonious with the interests of the people.”

For weeks, representatives of Maduro and his would-be successor have been shuttling back and forth to Barbados trying to agree on a common path out of the country’s prolonged political standoff.

The meetings have been slow-going and shrouded in mystery, with neither side disclosing details.

But Maduro’s supporters have accused the U.S. of trying to blow up the fragile process with sweeping new sanctions announced this week that freeze all of the government’s assets in the U.S. and even threaten to punish companies from third countries that keep doing business with his socialist administration.