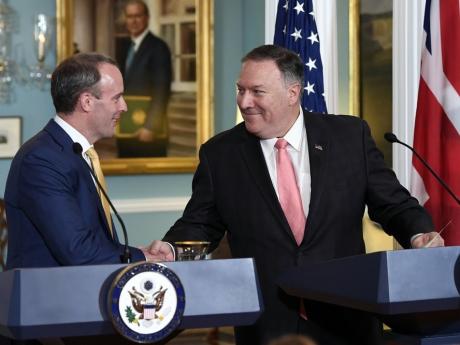 WASHINGTON (AP) — The Trump administration will pursue a free-trade agreement with Britain as soon as possible after it leaves the European Union, Secretary of State Mike Pompeo said Wednesday as the country’s new foreign secretary made his first official visit to the United States.

Speaking at a news conference with visiting British Foreign Secretary Dominic Raab, Pompeo said the Trump administration remains committed to respecting whatever Britain’s final decision on Brexit is and is eager to conclude a trade deal.

“We support the United Kingdom’s sovereign choice, however Brexit ultimately shakes out and we’ll be on the doorstep, pen in hand, ready to sign a new free trade agreement at the earliest possible time,” Pompeo said.

Raab said Johnson and his Cabinet are “absolutely resolved, determined” to leave the EU at the end of October with or without a deal to soften its effects.

He said he hoped to conclude a new trade deal with the U.S. “as soon as possible after we leave the EU on October 31.”