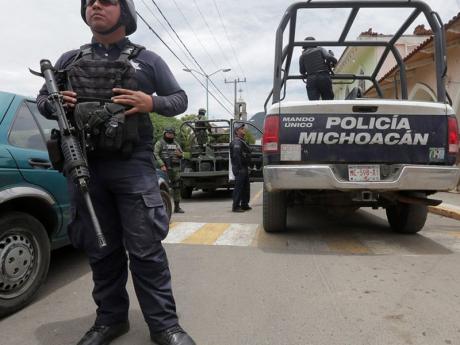 MEXICO CITY (AP) — Mexican police found nine bodies hanging from an overpass Thursday alongside a drug cartel banner threatening rivals, and seven more corpses hacked up and dumped by the road nearby.

Just down the road were three more bodies, for a total of 19.

The killing spree reported by prosecutors in the western state of Michoacan marked a return to the grisly massacres carried out by drug cartels at the height of Mexico’s 2006-2012 drug war when piles of bodies were dumped on roadways as a message to authorities and rival gangs.

Two of the bodies hung by ropes from the overpass by their necks, half-naked, and one of the dismembered bodies were women, Michoacan Attorney General Adrián López Solís said at a news conference.

The victims in the city of Uruapan had been shot to death. Some were hung with their hands bound, some with their pants pulled down.

While the banner was not completely legible, it bore the initials of the notoriously violent Jalisco drug cartel and mentioned the Viagras, a rival gang. “Be a patriot, kill a Viagra,” the banner read in part.

“This kind of public, theatrical violence, where you don’t just kill, but you brag about killing, is meant to intimidate rivals and send a message to the authorities,” said Mexico security analyst Alejandro Hope.

“This kind of cynical impunity has been increasing in Michoacan,” Hope added.