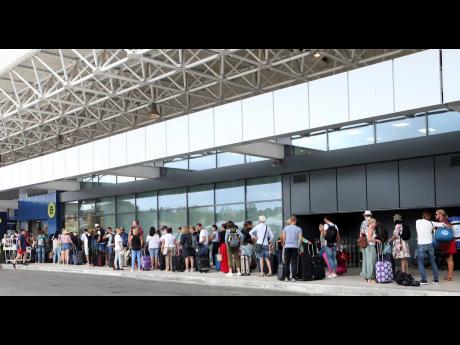 The Associated Press
British tourists wait in a queue at the Ioannis Kapodistrias Airport in Corfu island, northwestern Greece, Monday, Sept. 23, 2019. Hundreds of thousands of travellers were stranded across the world Monday after British tour company Thomas Cook collapsed, immediately halting almost all its flights and hotel services and laying off all its employees. (Stamatis Katopodis/InTime News via AP)

Hundreds of thousands of travellers were stranded across the world Monday after the British tour company Thomas Cook collapsed in the middle of the night, immediately halting almost all its flights and hotel services and laying off its employees.

Britain’s Civil Aviation Authority announced about 2:30 a.m. that Thomas Cook, a 178-year-old company that helped create the package tour industry, had ceased trading. It said the firm’s four airlines will be grounded, and its 21,000 employees in 16 countries – including 9,000 in the United Kingdom (UK) – will lose their jobs.

The collapse of the firm is expected to have sweeping effects across the European and North African tourism industries and elsewhere, as hotels worry about being paid for tourists they have already served, and confirmed Thomas Cook bookings for high-season winter resorts are suddenly cancelled.

Overall, about 600,000 people were travelling with the company as of Sunday, though it was unclear how many of them would be left stranded, as some travel subsidiaries were in talks with local authorities to continue operating. Thomas Cook says it served 22 million customers a year.

The British government was taking charge of getting the firm’s 150,000 UK-based customers back home from vacation spots across the globe, the largest repatriation effort in the country’s peacetime history. The process began Monday. but officials urged patience and warned of delays.

Some people took the news in stride. Bengt Olsson, who was travelling in Cyprus from Sweden, said there were worse places to be stranded.

The reality was far harsher for the Thomas Cook workers who lost their jobs overnight.