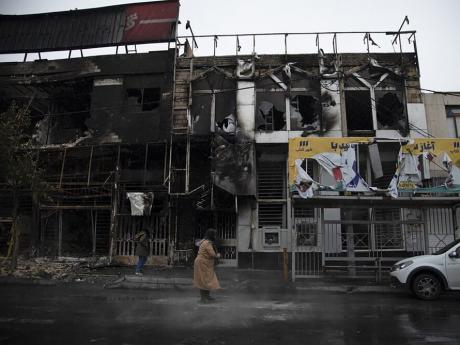 In this photo taken Monday, November 18, 2019, and released by Iranian Students' News Agency, ISNA, people walk past buildings which were burned during protests that followed the authorities' decision to raise gasoline prices, in the city of Karaj, west of the capital Tehran, Iran. (Masoume Aliakbar/ISNA via AP)

Iran’s government, which has not made nationwide numbers available for the toll of the unrest that began Friday, did not immediately respond to the report. A request for comment to its mission at the United Nations was not immediately acknowledged.

The Amnesty report comes after a U.N. agency earlier said it feared the unrest may have killed “a significant number of people.”

Amnesty added that it “believes that the real death toll may be much higher, with some reports suggesting as many as 200 have been killed.”

Iranian authorities have not offered a definitive account of how many people have been arrested, injured or killed in the protests that spread quickly across at least 100 cities and towns.

Authorities shut down internet access to the outside world Saturday, an outage that persisted Monday in the nation of 80 million.

That has left only state media and government officials to tell their stories.

State television showed video Tuesday of burned Qurans at a mosque in the suburbs of the capital, Tehran, as well as pro-government rallies, part of its efforts to both demonise and minimise the protests.