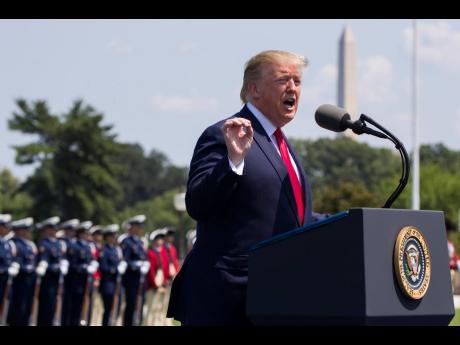 AP
In this July 25, 2019 file photo, President Donald Trump speaks during a ceremony for new Secretary of Defense Mark Esper at the Pentagon. If there was one day that crystalised all the forces that led to the impeachment investigation of President Donald Trump, it was July 25. That was the day of his phone call with Ukraine’s new leader, pressing him for a political favour.

The House impeachment inquiry will enter a pivotal stage this week, with investigators planning a vote on Tuesday to approve their report making the case for President Donald Trump’s removal from office as he decides whether to mount a defence before a likely Senate trial.

A draft report will be available for members of the House Intelligence Committee to view in a secure location before their planned vote on Tuesday, which would send their findings to the House Judiciary Committee to consider actual charges.

Majority Democrats say that the report will speak for itself in laying out possible charges of bribery or “high crimes and misdemeanours,” the constitutional standard for impeachment. Republicans want Democratic Representative Adam Schiff, chairman of the Intelligence Committee, to testify, although they have no power to compel him to do so, as they try to cast the Democratic-led inquiry as skewed against the Republican president.

“If he chooses not to (testify), then I really question his veracity in what he’s putting in his report,” said Rep Doug Collins, the top Republican on the Judiciary Committee.

“It’s easy to hide behind a report,” Collins added. “But it’s going to be another thing to actually get up and have to answer questions.”

Schiff has said “there’s nothing for me to testify about”, that he isn’t a “fact” witness, and that Republicans are only trying to “mollify the president, and that’s not a good reason to try to call a member of Congress as a witness”.

Coming after two weeks of public testimony, the findings of the House Intelligence Committee report are not yet publicly known. However, the report is expected to mostly focus on whether Trump abused his office by withholding military aid approved by Congress as he pressed Ukrainian President Volodymyr Zelenskiy to launch investigations into Trump’s political rivals.

Democrats also are expected to include an article on obstruction of Congress that outlines Trump’s instructions to officials in his administration to defy subpoenas for documents or testimony.

Democrats are aiming for a final House vote by Christmas, which would set the stage for a likely Senate trial in January.