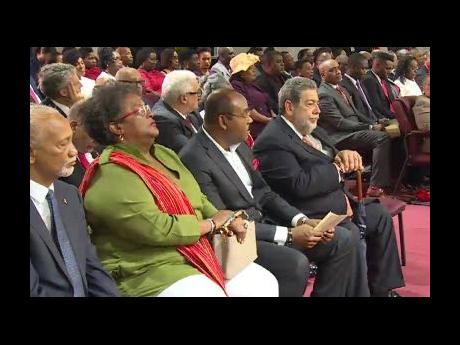 Antigua and Barbuda Prime Minister Gaston Browne on Tuesday praised Dominicans for fighting against “external intervention” as he joined two other regional leaders in celebrating the victory of Prime Minister Roosevelt Skerrit in the December 6 general election.

“Dominica has sent a resounding message to the rest of the world. You have said to them, especially the powerful, that notwithstanding your small size, that you will not subject Dominica to hegemonistic control,” Browne said, adding that he hopes the result of the election in which Skerrit’s Dominica Labour Party won 18 of the 21 seats would be a “lesson” for the international community.

“Because at the end of the day, we are small island states fighting to ensure the viability of our respective countries, fighting to uplift the living standards of our people. We do not fight ideological wars,” he said, adding” we have no ideological war to fight”.

Browne said that the Caribbean is about “pragmatism, about providing for our people, and we are too small to have enemies.

“That is why we have to be all-inclusive, that is why we have to embrace all nations and not to fight any ideological war or wars on behalf of any. So I say to the people of Dominica, congratulations for that message for them to understand that even though we are small, we will always stand on principle, and when it comes to democracy, no one can tell us about democracy.”

In his address, Gonsalves said that Caribbean people go early to the polls and provide a “deafening answer to those who would want to subvert the will of the people.

“Very quietly, the people of Dominica gave the message and from it I know, and the world knows, that heard melodies are sweet. But those unheard are sweeter, and sweetest is the quietude of voters in a free country lining up to vote and electing their government in an atmosphere of peace, tranquillity and security”.

Barbados Prime Minister Mia Mottley, who also addressed the ceremony where the new cabinet was named, said given the changing global environment, “we cannot stand alone.

“We are here conscious that elections are times when a society and a people reflect but when the election is over then the singular purpose of building a nation and forging a people must occupy us all,” Mottley said.