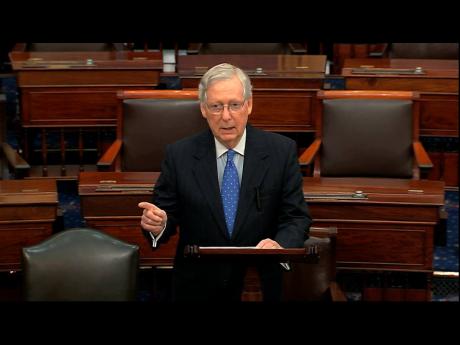 The Associated Press
Senate Majority Leader Mitch McConnell of Ky, speaks on the Senate floor, Thursday, December 19, at the Capitol in Washington.

The top Senate Republican on Thursday denounced the “most unfair” House impeachment of President Donald Trump and reassured Trump and his supporters that “moments like this are why the United States Senate exists”.

Signalling in the strongest terms yet that the GOP-controlled Senate will acquit Trump, Majority Leader Mitch McConnell of Kentucky declared that the House impeachment “risks deeply damaging the institutions of American government”.

As for what the Senate should do, the Kentucky Republican said, “It could not be clearer which outcome would serve the stabilising, institution-preserving, fever-breaking role for which the United States Senate was created and which outcome would betray it.”

McConnell described Trump’s impeachment as “the most rushed, least thorough, and most unfair impeachment inquiry in modern history”.

Fighting back and using McConnell’s own words, Democratic leader Chuck Schumer of New York then said on the Senate floor that the Republican leader was plotting the “most rushed, least thorough and most unfair” impeachment trial in history by declining to agree to call witnesses including former Trump national security adviser John Bolton, who declined to testify before the House.

“McConnell claimed the impeachment was motivated by partisan rage,” said Schumer. “This from the man who said proudly, ‘I am not impartial.’”

McConnell accused House Speaker Nancy Pelosi of being afraid to send “their shoddy work product to the Senate” after she threw uncertainty into the impeachment process late Wednesday by refusing to say when she would send two impeachment articles to the Senate for a trial.

He said the Democratic-controlled House “has let its partisan rage at this particular president create a toxic new precedent that will echo well into the future”.