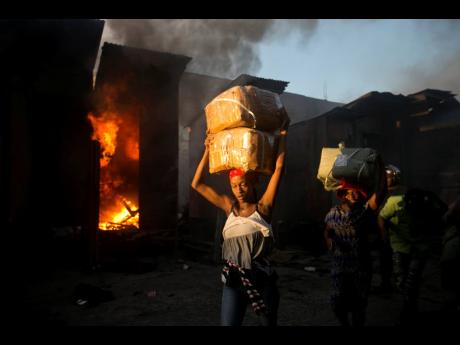 AP
Vendors carry salvaged merchandise from the burned ruins of the Guerite Market that was engulfed in flames in Port-au-Prince, Haiti, last Tuesday.

Haitian President Jovenel Moïse says he wants to use his new power to rule by executive order to reform the constitution and make his country easier to govern.

In a statement last Friday, Moïse said he was negotiating with opposition leaders to form what he called “a unity government” that would propose a constitutional reform that would go to a national referendum this year.

The constitutional reform would be aimed at strengthening Haiti’s presidency and executive branch, although the statement doesn’t not specify how it would do that.

Haiti’s 1987 constitution is seen by many observers as excessively dividing power between the executive and legislature in a way that fuels the country’s political instability and frequent deadlock.

Last year, for example, the country was unable to hold parliamentary elections because the parliament did not approve the budget necessary to hold the vote. As a result, the legislature was dissolved when members’ terms ran out at the start of 2020, and Moïse began to rule by executive order.

Haiti has been roiled by street protests and economic stagnation for much of Moïse’s nearly three years in office as opposition leaders demand his departure, saying he has mismanaged the economy and failed to take on corruption.

“We have a window of opportunity,” Moïse said. “I want to take it to fix what has been broken in the Haitian system for far too long and finally allow us to move forward.”

Opposition leader Andre Michel said he favoured a constitutional reform, but only after Moïse was pushed out of office.

“’We need a new constitution,” he said. “It will be put together by the transitional government, not Jovenel Moïse.”