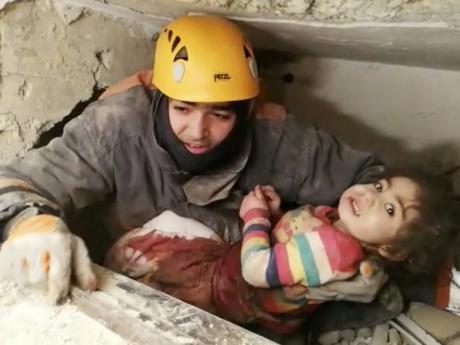 ANKARA, Turkey (AP) — Turkish emergency teams on Monday recovered the bodies of the last two missing quake victims from the rubble of a collapsed building, raising the death toll from the powerful tremor that hit eastern Turkey to 41.

At least 45 survivors have been pulled out of the rubble alive.

Rescue teams on Monday drilled through the rubble in the eastern city of Elazig, trying to reach a missing 75-year-old woman and another person, as relatives waited nearby. Interior Minister Suleyman Soylu and Mehmet Gulluoglu, the head of the Turkish disaster management agency, later announced that their bodies were pulled out from the debris.

The body of a third missing person was pulled out of the same collapsed structure overnight.

Television footage showed scores of emergency workers gathered in a circle near the rubble to pray for the victims, before the search-and-rescue mission was formally called off.

The quake destroyed 76 buildings and damaged more than 1,000 others, forcing survivors to take refuge in tents, mosques, schools, sports halls and student dormitories.

Authorities warned people not to return to homes that could be unsafe.