Chastanet laments failure to get solution to crisis in Haiti, Venezuela 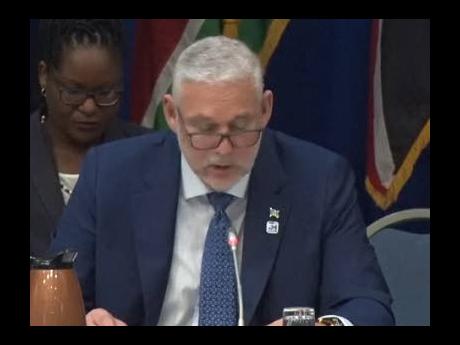 The former chairman of the Caribbean Community (CARICOM), Allen Chastanet, on Tuesday said the region needs to do more to deal with the socio-economic and political situation in Haiti, the French-speaking member country of the regional integration movement.

“While understandably we have ring-fenced some of Haiti’s rights and privilege in our treaty, more importantly, we must be honest brokers and admit that we, like many others, have failed in our attempts to find a solution”.

CARICOM leaders, at their summit in St Lucia last July, had agreed to send a prime ministerial delegation, comprising the leaders of Jamaica, St Lucia and The Bahamas, to Haiti where opposition forces are seeking to remove President Jovenel Moise from office over allegations of embezzlement.

Last October, CARICOM said that it was “deeply concerned” over the protracted political crisis in Haiti and that it was still awaiting a response from Moise in order for a good offices prime ministerial delegation to visit.

Opposition parties in Haiti have accused Moise of embezzlement, but the head of state has defended himself against the report of the Superior Court of Accounts and Administrative Litigation into programmes and projects funded by PetroCaribe, an oil alliance of many Caribbean states with Venezuela to purchase oil on conditions of preferential payment.

Chastanet told the regional leaders on Tuesday that there’s need to “collectively chart a new course” as it regards Haiti.

“We owe it to the people of Haiti who deserve much more, especially given our common histories,” he said.

Chastanet said that the situation in Venezuela, where the United States is pushing for the removal of President Nicolás Maduro, seems to be at a “standstill”.

CARICOM countries have adopted the position of non-interference and non-intervention in the internal affairs of the South American country but has on numerous occasions said they are willing to serve as an “honest” broker in the situation.

Washington and many of its allies are supporting the Opposition leader, Juan Guaidó, to replace Maduro, who is backed by Cuba, China and Russia.

In the report of his six-month stewardship of the regional integration movement, Chastanet thanked the leadership of St Kitts-Nevis, Prime Minister Dr Timothy Harris; Trinidad and Tobago’s Prime Minister Dr Keith Rowley; and the host, Prime Minister Mia Mottley, “on continuing and leading the efforts of CARICOM on the Venezuela crisis”.