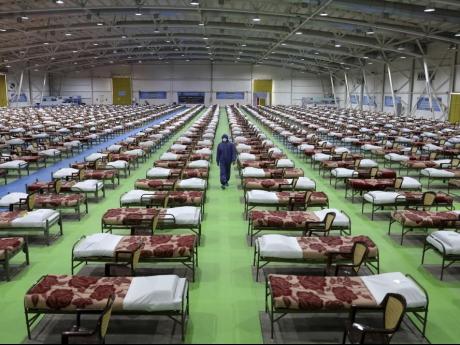 A member of the Iranian army walks at a temporary hospital in Tehran, Iran, Thursday, March 26, 2020. (AP Photo/Ebrahim Noroozi)

The human and economic toll of the lockdowns against the coronavirus mounted Thursday as India struggled to feed the multitudes, Italy shut down most of its industry, and a record-shattering 3.3 million Americans applied for unemployment benefits in a single week.

As the number of infections worldwide reached a half-million and deaths climbed past 23,000, the damage to people’s livelihoods and their well-being from the effort to flatten the rising curve started to come into focus.

In India, where the country’s 1.3 billion people were under orders to stay home, legions of poor were suddenly thrown out of work, and many families were left struggling for something to eat.

“Our first concern is food, not the virus,” said Suresh Kumar, 60, a bicycle rickshaw rider in New Delhi whose family of six relies on his daily earnings of 300 rupees, or $4. “I don’t know how I will manage.”

India has the world’s second-highest number of people living in extreme poverty. Rickshaw drivers, produce peddlers, maids, day labourers and other low-wage workers form the backbone of the economy, and many live day to day on their pay and have no savings to fall back on.

The Indian government announced a 1.7 trillion rupee ($22 billion) economic stimulus package that will deliver monthly rations of grain and lentils to a staggering 800 million people.

The US had more than 1,100 deaths, about 400 of them in New York State, the worst hotspot in the nation. Most of those victims were in New York City, where hospitals are getting swamped.

Italy and the United States have essentially tied China, the origin of the outbreak, in confirmed cases, with each country over 80,000 and collectively making up about half the worldwide total.