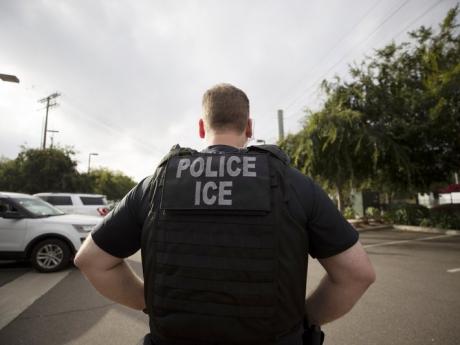 In this July 8, 2019, file photo, a US Immigration and Customs Enforcement (ICE) officer looks on during an operation in Escondido, California. (AP Photo/Gregory Bull, File)

WASHINGTON (AP) — Pressure was mounting on the Trump administration to release people from immigration detention facilities where at least one detainee has tested positive for COVID-19 and advocates fear tight quarters and overall conditions could cause rapid spread of the virus.

The US holds around 37,000 people in immigration detention.

Detainees and advocates say many are vulnerable because of age and pre-existing medical conditions, and because they are often held in open rooms, beds 3-feet apart, and without adequate supplies of masks or other protections.

“It’s impossible to stay calm,” said Marco Battistotti, an Italian who is among 170 people detained by US Immigration and Customs Enforcement at the Bristol County jail in Massachusetts.

The 54-year-old Battistotti was among about 100 detainees at the county jail near Cape Cod who signed a letter released by a local immigration lawyer detailing conditions inside.

They asked to be released to await decisions on their immigration cases.

The administration has tried to balance its overall hard line on immigration, a signature policy of President Donald Trump, and its response to the outbreak, with ICE announcing previously that it would “temporarily adjust” operations to focus on apprehending people who pose a risk to public safety or are subject to mandatory detention because of a criminal record.

Immigrant advocates, including the American Civil Liberties Union, filed lawsuits in California, Maryland, Pennsylvania and elsewhere, seeking court orders for the immediate release of people in immigration detention, especially those at risk because of their age or medical conditions.