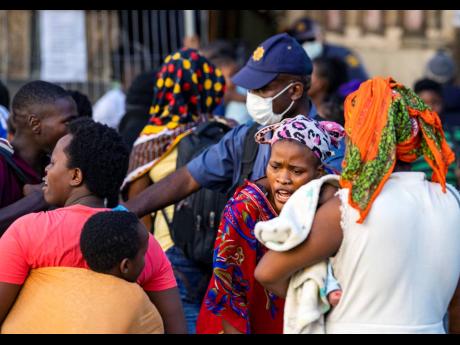 South African police wearing riot gear forced their way into a church in central Cape Town on Thursday to remove hundreds of foreign migrants who had been sheltering there for months.

The operation at the Central Methodist Church was aimed at ending a long standoff between the group of foreign nationals and city authorities. The migrants refused to leave the church and had previously demanded that South Africa relocate them to other countries, including the United States and Canada, because they had been victims of xenophobic threats in South Africa last year.

Local media reported that police officers broke down the front and rear doors of the church in the historic Greenmarket Square to remove the migrants. The migrants were led onto buses and driven away, reportedly to a temporary camp outside the city.

South Africa is in the midst of a 21-day lockdown because of the coronavirus pandemic and people are only allowed to leave their homes to buy food, medical supplies and other essential items, or to perform essential work.

The migrants will have to remain at the temporary camp for at least the remaining two weeks of the lockdown. South African authorities have said they will verify the identities of the migrants and properly process those seeking asylum.

Police undertook a similar operation last month to remove migrants who had been camping in the square outside the church.