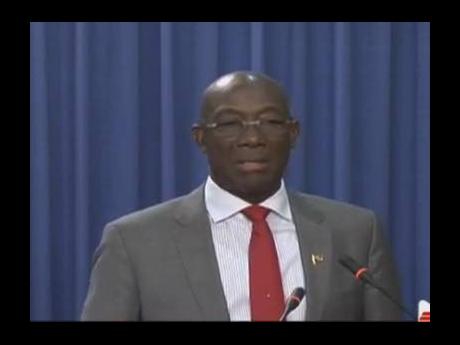 Prime Minister Dr Keith Rowley on Wednesday rubbished suggestions that the visit of Venezuela’s Vice President Delcy Rodriguez last Friday was in relation to the decision by the United States to indict President Nicolás Maduro and other senior Venezuelan government ministers on drug-related charges.

A brief government statement issued following the visit on March 27 had noted that “the meeting focused on the strategy being deployed in both countries to combat COVID-19” and that Rodriquez “is directly responsible for the COVID-19 response in Venezuela”.

There has been much speculation regarding the visit with the Trinidad Express newspaper under the headline ‘Why was Venezuela’s VP allowed to fly into TT’ at a time when the country’s borders had been closed as part of the efforts to stop the spread of the coronavirus.

The newspaper quoted National Security Minister Stuart Young as confirming that “special permission” was granted for her to enter Trinidad and meet with Rowley.

In addition, various radio talk shows have sought to link the visit to the decision by the Justice Department to file indictments against Maduro, whom Washington has been seeking to remove from office and replaced with Opposition Leader Juan Guadio.

But speaking at a news conference here on Wednesday, Rowley told reporters “the presence of the vice president of Venezuela had absolutely nothing to do with the Maduro, United States criminal development.

“Absolutely nothing. As a matter of fact it did not come up,” said Rowley.

“And let me say one more thing because I see there those who believe that there are something here to make jack jab, jab over. When as Prime Minister I meet with the Queen of England, the secretary general of the United Nations, the president of Ghana or the vice president of Venezuela, I want the people of Trinidad and Tobago to understand that it is all in the interest of the people of Trinidad and Tobago.

Under Rowley, Trinidad and Tobago has adopted a policy of non-interference and non-intervention in the internal affairs of Venezuela, even as thousands of citizens from the South American country have flocked here to escape the socio-economic situation in their country.