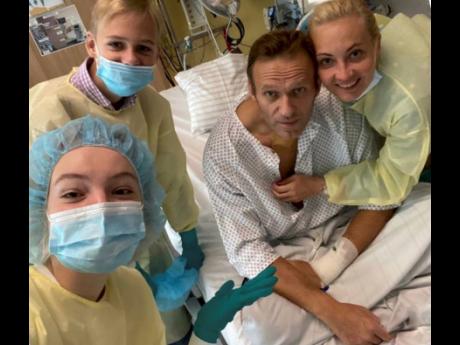 Uncredited
This handout photo published by Russian opposition leader Alexei Navalny on his instagram account, shows himself (centre) and his wife Yulia (right), daughter Daria, and son Zakhar posing for a photo in a hospital in Berlin, Germany.

Russian opposition leader Alexei Navalny on Tuesday posted a picture of himself from his hospital bed in Germany where he’s recuperating from being poisoned with a nerve agent, wryly joking about being able to breathe on his own.

“Hi, this is Navalny,” he wrote in the Russian-language post on Instagram in the first image of the 44-year-old since he was taken to Berlin’s Charite hospital. The photo shows him being given a hug by his wife Yulia and flanked by his two children as he sits upright in his bed in a hospital gown.

“I have been missing you. I still can’t do almost anything on my own, but yesterday I managed to breathe on my own for the entire day,” he added in the post, which got over 1.1 million likes in several hours.

Separately, Navalny’s spokeswoman Kira Yarmysh tweeted that once he has recovered, Navalny plans to return to Russia, where he has supported opposition candidates and waged anti-corruption battles. “No other option has ever been considered,” she wrote.

Navalny fell ill on a flight from Siberia to Moscow on August 20 and was treated at a hospital in the city of Omsk. Two days later, he was flown to the German hospital, where he was kept in an induced coma for more than two weeks as he was treated with an antidote. On September 7, doctors said his condition had improved enough for him to be brought out of the coma.

On Monday, the hospital said he had been removed from a ventilator and was able to leave his bed for “short periods of time”.