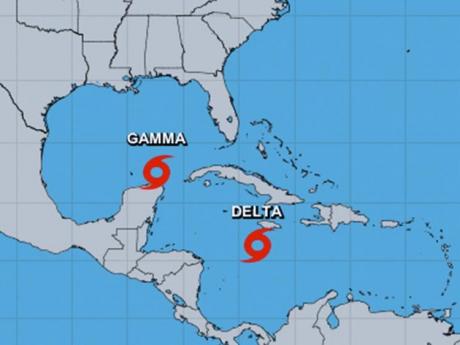 Gamma lashed Mexico’s resort-studded coast with near-hurricane force winds, and drenched Tabasco and Chiapas states with a deluge that killed at least 6 people and forced thousands from their homes.

Delta, meanwhile, was forecast to become a hurricane before hitting Cuba, and then intensify with winds around 100 miles per hour before making landfall on the US Gulf Coast around Friday.

And while there is a large uncertainty in track and strengthening five days out, “there is a risk of dangerous storm surge, wind, and rainfall hazards along the coast from Louisiana to the western Florida Panhandle,” the hurricane center said.

Mexico’s civil defence agency said in a statement that four of the deaths blamed on Gamma, including two children, were in Chiapas, where a landslide on a mountainous slope buried their home. The other two deaths were in Tabasco state, where one person was dragged away by the water and another drowned..

Gamma, along with cold fronts, combined over the weekend to cause extreme rains in parts of the Yucatan Peninsula and Chiapas, affecting more than half a million people. The hardest-hit state was Tabasco, where more than 3,400 were evacuated to shelters.

The storm came ashore Saturday near Tulum with maximum sustained winds of nearly 70 miles per hour  — 4 mph (9 kph short of hurricane force), according to the US National Hurricane Center in Miami.

Thousands of tourists were affected in a resort area that only recently reopened after a pandemic shutdown: The state’s tourism department reported Friday on Twitter that more than 41,000 tourists were present in Quintana Roo, with hotels in Cancun and Cozumel already at more than 30% occupancy.

Delta is the earliest 25th named storm to form in the Atlantic, beating the old record of November 15, 2005, according to Colorado State University hurricane researcher Phil Klotzbach.

Delta had top winds of 40 miles per hour early Monday and was about 270 miles southeast of Grand Cayman.

It was moving near 9 miles per hour, on track to hit the Cayman Islands Monday night and approach western Cuba Tuesday afternoon or evening before moving into the Gulf on Wednesday.

A tropical storm warning was issued for the Cayman Islands and a hurricane watch was in effect for western Cuba and its Isle of Youth.

Forecasters warned of heavy rainfall, flash flooding and mudslides in parts of Jamaica, the Cayman Islands and western Cuba.