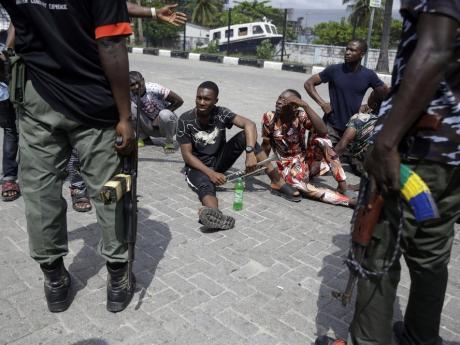 LAGOS, Nigeria (AP) — At least 51 civilians have been killed in Nigeria’s unrest following days of peaceful protests over police abuses, the president said Friday, blaming “hooliganism” for the violence while asserting that security forces have used “extreme restraint.”

In a statement, Buhari also said 11 policemen and seven soldiers had been killed by “rioters” as of Thursday, and “the mayhem has not stopped.”

He said another 37 civilians were injured in some of Nigeria’s worst turmoil in years.

The president said the well-intentioned protests were hijacked by thugs.

But many Nigerians are upset by what the president hasn’t said.

Buhari in a national address Thursday night didn’t mention the shootings, instead warning protesters against “undermining national security and law and order.”

On Friday he said the government “will not fold its arms and allow miscreants and criminals continue to perpetrate acts of hooliganism.”

A witness of Tuesday night’s shooting, 33-year-old Isaiah Abor, ventured out anyway to visit the scene where solders had opened fire.

He managed to escape the chaos.

“When [the soldiers were making comments that the flag is not bulletproof, that’s when I knew this was going to go out of hand,” Abor said. Empty ammunition shells still littered the ground.