Retailers board up, secure stores for election 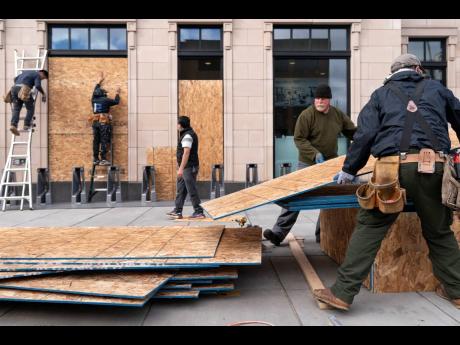 The Associated Press
Ahead of the presidential election, workers with Baguer Construction LLC board up a Walgreens in Washington yesterday.

Retailers including Nordstrom, Tiffany and Saks Fifth Avenue say they’re planning to board up windows or add extra security personnel in some locations ahead of the presidential election.

Retailers are trying to protect themselves against any civil unrest in a year that has seen widespread protests over social justice. More than 600 locations, particularly in Chicago, New York and Washington, DC, have put in work orders to board up windows or add related security measures in advance of the election, according to ServiceChannel, which connects retailers with contractors that do such work. Nearly two-thirds of those orders have been received since this past Tuesday.

The National Retail Federation, the retail industry’s largest retail trade group, says it has sent advisories to its members and created forums for them to discuss security strategies. But the trade group’s general counsel, Stephanie Martz, says stores are straddling a fine line.

Martz says, “If you board up early, does that increase the likelihood there is going to be violence in that area, or does that discourage it?” In balance, she says she thinks it discourages it.