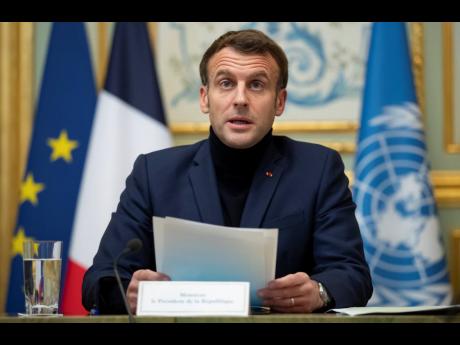 AP
French President Emmanuel Macron makes introductory remarks during a visioconference meeting about support and aid for Lebanon, at the Elysee Palace in Paris, yesterday.

FRANCE AND the United Nations (UN) vowed Wednesday to keep providing humanitarian aid to Lebanon but urged the country’s leaders to form a new government as a political deadlock in Beirut has blocked billions of dollars in assistance for the cash-strapped country hit by multiple crises.

A meeting organised by the U.N. and France was the second since the disastrous Aug. 4 explosion that destroyed Beirut’s port and wrecked large parts of the capital. The blast, which killed over 200 people and wounded thousands, was caused by the detonation of nearly 3,000 tons of ammonium nitrates that had been stored unsafely at a port warehouse for years.

The explosion came amid an unprecedented financial meltdown – worsened by pandemic-related closures – that has brought soaring inflation, poverty and unemployment.

French President Emmanuel Macron and UN Secretary General Antonio Guterres announced the creation of a fund handled by the World Bank, the UN and the European Union to provide support for Lebanon, including food, healthcare, education and the reconstruction of the Port of Beirut.

“We can, together, help the Lebanese people move beyond the emergency phase and on to the path for longer-term recovery and reconstruction,” Guterres said.

The plan also calls for “a targeted set of reforms, which are essential to facilitate recovery and reconstruction”, he added.

Macron said yesterday’s conference would “make it possible to complete the emergency response and provide an early recovery response”.

But the French leader warned that the promised aid “won’t replace the commitment of Lebanese political forces and institutions to form a government as quickly as possible and implement a road map for reforms without which the (long-term) international economic help won’t be released”.