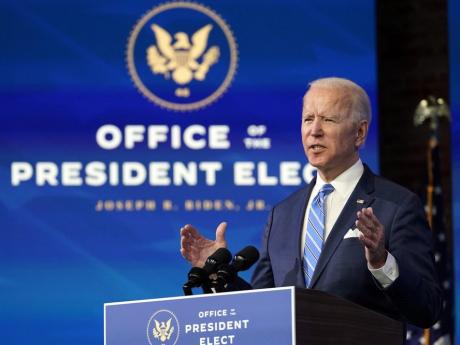 President-elect Joe Biden speaks about the COVID-19 pandemic during an event at The Queen theater, Thursday, January 14, 2021, in Wilmington, Delaware. (AP Photo/Matt Slocum)

WILMINGTON, Delaware (AP) — President-elect Joe Biden has unveiled a $1.9 trillion coronavirus plan to end “a crisis of deep human suffering” by speeding up vaccines and pumping out financial help to those struggling with the pandemic’s prolonged economic fallout.

Called the “American Rescue Plan,” the legislative proposal would meet Biden’s goal of administering 100 million vaccines by the 100th day of his administration and advance his objective of reopening most schools by the spring.

On a parallel track, it delivers another round of aid to stabilise the economy while the public health effort seeks the upper hand on the pandemic.

“We not only have an economic imperative to act now — I believe we have a moral obligation,” Biden said in a nationwide address Thursday. At the same time, he acknowledged that his plan “does not come cheaply.”

Biden proposed $1,400 checks for most Americans, which on top of $600 provided in the most recent COVID-19 bill would bring the total to the $2,000 that Biden has called for.

It would also extend a temporary boost in unemployment benefits and a moratorium on evictions and foreclosures through September.

And it shoehorns in long-term Democratic policy aims such as increasing the minimum wage to $15 an hour, expanding paid leave for workers, and increasing tax credits for families with children.

The last item would make it easier for women to go back to work, which in turn would help the economy recover.

The political outlook for the legislation remained unclear.

In a joint statement, House Speaker Nancy Pelosi and Senate Democratic leader Chuck Schumer praised Biden for including liberal priorities, saying they would move quickly to pass it after Biden takes office next Wednesday.