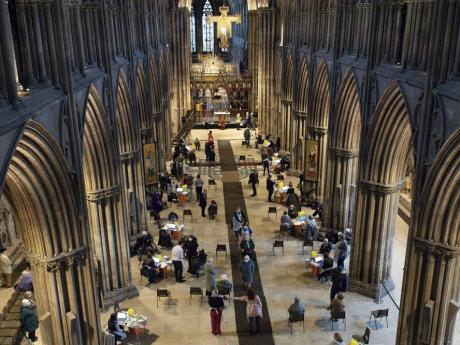 Members of the public receive the Oxford/AstraZeneca coronavirus vaccine at Lichfield Cathedral in Staffordshire, England, Friday, January 15, 2021. The UK is ramping up its mass vaccination program as the government seeks to protect the country’s oldest and most vulnerable residents before easing a third national lockdown. (Jacob King/PA via AP)

LONDON (AP) — The British government banned travel from South America and Portugal to ensure a new variant of COVID-19 found in Brazil doesn’t derail the United Kingdom’s vaccination programme, although there are no signs the variant has reached the country, Britain’s top transportation official said.

UK Transport Secretary Grant Shapps said the entry ban, which took effect Friday morning, was extended to passengers arriving from Portugal because many people who come to Europe from South America travel through Portugal.

“We don’t have cases at the moment, but this is a precautionary approach,” Shapps told the BBC.

“We want to make sure that we do everything possible so that vaccine rollout can continue and make sure that it’s not disturbed by other variants of this virus.”

The announcement comes just a few weeks after many countries banned travel from the UK following the discovery in England of another, more contagious variant of the virus that has been blamed for a sharp rise in COVID-19 cases and deaths.

Scientists have said there is no indication the UK variant reacts any differently to coronavirus vaccines.

Portuguese Foreign Minister Augusto Santos Silva called the UK’s decision “without logic” and said he would seek clarification from his British counterpart.

“Suspending flights from Portugal with the argument of the connections between Portugal and Brazil is, with all due respect, completely absurd,” he said in an interview published online by the newspaper Diario de Noticias.

The UK is ramping up its mass vaccination program as the government seeks to protect the country’s oldest and most vulnerable residents before easing a third national lockdown.

According to government figures on Friday, a little more than 3.2 million people, or around 5% of the British population, have received the first dose of a two-shot vaccine.

Britain plans to give the first dose to more than 15 million people, including those over 70, frontline healthcare workers, and others who are particularly vulnerable to the virus, by the middle of February.